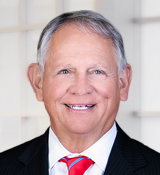 Skyward Financial helps its clients understand their individual risk profiles and how to effectively plan for their short, medium, and long-term goals. This team is rooted in Houston and pays homage to the city’s legacy in space exploration and the history of explorers using astrology to navigate the high seas when naming their group Skyward Financial. They are trusted and respected in their practice; consistently providing relevant investment opportunities and navigating risk to create a holistic approach for their clients’ financial well-being.

Lynn Houston has led an esteemed 54-plus year career in finance and has become one of the most respected and experienced industry leaders in his field. Houston began his career in the financial service industry in 1965, working in the back office of a local firm, diligently working around the clock to service mutual funds and train, while also attending the University of Houston.

Houston’s career has never been one to be confined to one role in finance. Once equipped with a degree in accounting, he worked as an auditor for just a year before being enticed to lead the mutual fund and training departments of Dempsey Tegeler. Houston went on to receive his securities license in 1969, and from then, began to provide client services to his own clients.

Ever one to be in-demand in the industry, Houston then became an energy analyst with investment bankers Cowen & Co., then an investment banking analyst with the prestigious Lehman Bros., followed by becoming a branch manager with Donaldson Lufkin Jenrette, and then taking his expertise to Rauscher Pierce.

At J.C. Bradford & Co. is where Houston established one of his biggest career achievements. Starting there in 1997, as the first ever Texas employee for the long-running Nashville-based investment banking and brokerage and the regional manager, he built their Texas Region from the ground up, to an expansive five highly successful offices, employing an impressive 123 financial advisors. Upon the sale of J.C. Bradford & Co., Houston became the Texas and Louisiana regional manager for the investment management company Legg Mason.

When Legg Mason was sold, Houston started a new chapter by launching his own practice. For this next move, he kept closer to home, going into business with his son, Matthew Houston, and launching Skyward Financial.

In addition to his unrivalled expertise in financial investments, Houston is also very active in his community; including his work with the Houston Athletic Foundation, serving as Chairman of the Houston Cougar Cookers, a member of the advisory board of the Galveston Bay Foundation, and an active supporter of The Innocence Project, campaigning to put an end to wrongful convictions and to prevent future injustices in the criminal justice system.

Committed to my clients, dedicated to protecting their assets, and striving to grow their financial success, supported by a firm built on experience, stability, continuity, innovation and financial safety.

Since our founding in 1955, Wedbush has been a leader in the financial services industry providing our clients, both private and institutional, with a wide range of securities brokerage, wealth management, and investment banking services; Headquartered in Los Angeles, California with 100 registered offices and nearly 900 colleagues, the firm focuses on client service and financial safety, innovation, and the utilization of advanced technology.

The background of this firm and investment professionals may be found on FINRA’s BrokerCheck.

Wedbush Financial Advisors and Independent Contractors may only conduct business with the residents of the states and/or jurisdictions for which they are properly registered. Securities and Advisory Services Offered Through Wedbush Securities, Inc.