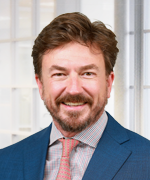 Matthew Doull is a Managing Director, TMT Investment Banking for Wedbush and is based in our New York office. He began his career as a financial journalist at The Daily Telegraph in London where he covered TMT. From 1998-2000, Matthew served as Chairman of Trip.com, a pioneering online travel business which he sold to Galileo. Subsequently he was a Senior Analyst at SAC Capital where he was responsible for global TMT investing for the $12B hedge fund, and was a Portfolio Manager at Pequot Capital Management .

In 2009, Matthew and his partners created Prometheus Global Media to acquire The Hollywood Reporter, Adweek, Backstage, The Clio Awards and Billboard from Nielsen. He served as an owner/operator at Prometheus before selling the assets to Guggenheim Partners in 2013.  Most recently, he was co-Head of Technology Investment Banking at BDA Partners based in Hong Kong, and advised on cross-border M&A and capital raising for corporate, private equity, family office and VC clients including Adweek, Chope, Investcorp, KKR, Lionsgate Entertainment, Maveron Capital, Northstar, Saban Capital, Singapore Press Holdings, Systran International, Viacom, Vntrip and World Scientific Publishing.

Matthew has served on the board of The Kitchen, downtown New York City’s leading avant-garde art and performance institution, since 2011. He obtained his Bachelor of Arts from Brown University and holds citizenship in South Africa, the United States and the United Kingdom.