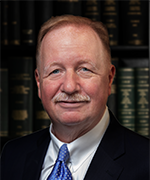 Andrew Druch serves as Executive Vice President and General Counsel & Chief Administrative Officer for Wedbush Securities Inc. He is responsible for firm-wide oversight of legal, compliance, surveillance, and regulatory matters, as well as human resources, marketing, public relations, events and corporate governance. He is a member of the Wedbush Board of Directors and serves on the President’s Executive Committee.

Andrew has over 30 years of broad-reaching legal experience in securities and banking. Throughout his career he has played a pivotal role in building and mentoring legal and compliance departments to better serve companies’ business lines. He held the role of General Counsel for ING Bank, Rabobank, and most recently, DNB. Andrew began his legal career at the New York Stock Exchange, where he was held in high regard for his deep regulatory knowledge, drawing attention from firms, including Lehman Brothers and Drexel Burnham Lambert, where he played an integral role during both of the firms’ periods of success.

Andrew received his bachelor’s degree in Political Science from the State University of New York at Albany and his Juris Doctor from Rutgers University School of Law. He is licensed to practice law in CA, FL, and NY and holds his Series 7, 14, 24, and 63 licenses.