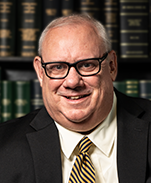 Executive Chairman of the Board

Donald Hultgren is Executive Chairman of the Board of Wedbush Securities, Inc. Don also chairs the President’s Executive Committee.

With over 35 years of experience in the financial industry, Don joins Wedbush after being President of Three Part Advisors, LLC, a Texas-based, capital markets advisory firm. Previously, he was President and Chief Executive Officer of SWS Group, the New York Stock Exchange listed holding company of Southwest Securities. Don began his career in 1981 as an equity research analyst and was Director of Equity Research at Raymond James and Associates before moving on to SWS.

Don earned his bachelor’s degrees in Accounting and Business/Management from Augustana College in Rock Island, IL, and then went on to complete his Master of Business Administration with a concentration in Finance from the University of Texas at Austin. He holds his Series 7, 16, 24, and 63 licenses.